Breaking the Habit of Being Yourself:  How to Lose Your Mind and Create a New One.
Joe Dispenza
Hayhouse Publishing:  Feb, 2012 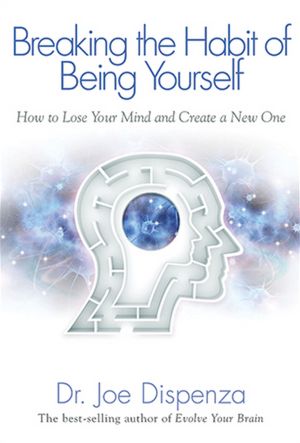 Breaking the Habit of Being Yourself

Joe’s gone quantum!  I thoroughly enjoyed Dispenza’s first book, Evolve Your Brain (see that book report).  That work from a few years back was entirely classical neurochemistry.  In Breaking the Habit Dispenza starts his book out with a captivating explanation of how a quantum viewpoint gives us great choice in creating the reality we wish.  Throughout the remainder of the book Dispenza blends the quantum viewpoint and the classical neurobiological viewpoint to provide a real sense of freedom and possibility for creating the life that we want.

Dispenza does as great a job with explaining the classical neurochemistry in this new book as he did in the former Evolve Your Brain.  The quantum is, of course, a powerful addition to his new book.  Additionally, in Breaking the Habit, Dispenza provides a presentation of brain wave theory and how our different frequencies impact our way of being.  I haven’t seen this presentation in any of the other brain books I’ve read so far. I plan to reread this brain wave section a number of times until I get a feel for how these brain waves show up in our lives.  For a meditator like Joe,  brain waves are an integral part of explaining the power of a meditating mind.

The final section of Breaking the Habit provides a 4 week step-by-step guide to transforming your brain and your life.  Dispenza is an accomplished meditator and this provides his framework for achieving transformation in a person’s life.  Dispenza is clear that in providing his 4 week guide to transformation, his is doing so because its hard work, and old brain circuits must be overcome by new ones.

Just like in Evolve Your Brain, I come away wondering whether it has to be as hard and disciplined as Joe says.  Maybe so.  EFT never seems hard to me, intense yes, but never hard. There’s never anything to do in EFT, just be aware and let the intensity around issues dissipate by the process of awareness.  But maybe EFT doesn’t really provide so much of a tool for the positive life changing work – it just works great at removing blocks.

So here’s my observation on this.  Dispenza has a person create a desired future, and then he offers a step by step program to accomplish the subtitle of his book: Lose Your Mind and Create a New One.  In creating the desired view, that collapses the quantum wave from infinite possibilities to this one possibility.  And its immediately clear to me why Dispenza’s process is hard work.  One’s collapsed wave, one’s physical material reality, is now in two places – the old neurochemistry of the former self and goals,  and the new collapse of the wave function into a desired future identity.  Sure – that’s going to be work.

When I do EFT with people,  our only task is to be aware of emotions, memories, and/or physical sensations in the body.  Following these three things with awareness and attention generally brings a person to a more peaceful state – and also physical relief.  During this process – I stop the person if they get into analysis mode, or into planning mode – because those modes seem to put the person right back in their old state, their old energy patterns, rather than allowing a new peace and relief to become present.

Okay – now here’s my question.  Once a person feels peaceful and relieved, once they are free from their trauma, anxiety, physical ailment, or whatever,  is that the time that Joe’s step by step program becomes necessary for continued transformation? In other words, without the hard work of Joe’s recommended transformation, would a person just be stuck, peaceful and relieved, but nonetheless stuck?

There is something that feels so battle-like to me about Dispenza’s approach.  And something in me rebels against a battle approach – not just a mild rebellion, but a fairly intensely emotional rebellion agains the idea that personal transformation requires a battle to rewire one’s way of being.

One reason I rebel against a battle mode is that in my experience battle mode doesn’t fix the ailments of anxiety, trauma, physical ailments, or whatever else is impacting a person’s wellbeing.  People come to EFT expecting that they are going to have to DO one more thing, to go to battle again, and they’ve been battling against their demon over and over again, and they’ve come to EFT because they’ve never ultimately won their battle.  They are weary, and they have no idea that there is anything other than battle mode.  EFT stops the war, pays attention, and by awareness, healing often occurs. It is as if we are innately ready to move into a state of wellness if we just stop getting in the way with our intentional battles.  The battles all happen in the territory of the collapsed wave, the single chosen possibility.  Awareness brings us back to the quantum state of infinite possibility, and one of those possibilities is peace, healing, contentment.

Here’s a hypothesis.  Instead of Dispenza’s battle  mode (and not just Dispenza, but almost everyone who is tyring to help people achieve positive change in their lives) what if a pure process of awareness was used.  I could see it operating like this.

I really appreciate Joe Dispenza giving us a process for employing brain chemistry and quantum energy toward creating our desired future.  In my own EFT work, I’ve been focusing mostly on helping people remove physical and emotional pain from their lives.  Dispenza is challenging me to think about how to work with people in achieving the positive goals in their life.  I feel creatively challenged by Dispenza’s work, and I look forward to engaging  his work as I develop in this area of positive transformation.  Thank you Joe!