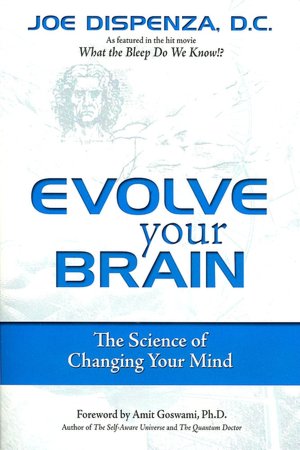 Evolve Your Brain – by Joe Dispenza

At just over 470 pages,  Joe Dispenza has done a mammoth work of combining brain chemistry with personal development.  He starts it with a personal story of when he crashed his bike with an SUV and broke his back in multiple places.  Doctors all recommended immediate surgery, but after three agonizing days, he chose to be taken home and trust that his body would heal itself.  Meditation, raw food diets, you can read the book for all the details, but ten weeks later he was back at work and exercising again.  Doctors had said if he stood without rods being inserted into his back he would break his spinal cord and be paralyzed.  So begain Dispenza’s serious pursuit of how the brain works and how we can cooperate with our brain and body for personal development.

I am reading all these brain books in search of how EFT works, and I got a big clue from EVOLVE YOUR BRAIN.  It turns out that the cells of our body adapt over time to whatever baseline of chemicals are being produced from our emtions.  Every time we have a thought, we have an emotion about that thought.  Every emotion produces peptide chemicals that then distribute through the body.  If we try to change our emotional state, (for instance from depressed to energized)  then the chemicals that the brain produces are different, and the chemicals around the cells are different. Cells do not like these changes in levels. Cells have one goal  in this regard – to maintain homeostasis.  Whatever the baseline chemistry is, keep that going.  If its a stress chemistry, or a fear chemistry, or whatever, the cell wants to keep that going if its become used to it.  Dispenza actually uses the word addiction in describing this behavior of the cell.

As I read this section of the book, I felt like I had come across a possible explanation for EFT.   Somehow, EFT may be overcoming this addiction to the chemical status quo.  After all, its so often reported that anxiety levels decrease, fear disappears, etc, etc, after Tapping.  If that’s the case it could be explained by the cells of the body somehow quickly overcoming their addiction to the old status quo and quickly accepting the new brain chemistry, the new emotions, that have resulted from tapping. Hugely EXCITING!

When Dispenza gets to the topic of Evolving Our Brain, his preferred tool is Mental Rehearsal.  This is a process of becoming singularly focused adn then rehearshing the new desire behavior or action in our mind, without any movement, but with a completely faithful rehearsal of the action or behavior that is desired.  An hour a day for three weeks is Dispenza’s prescription if we want to make changes in our lives.  He admits that its hard to have this commitment, but he notes the huge rewards.

I was thrilled to read Evolve Your Brain, the brain chemistry descriptions are thorough but  very readable.  The invitation to Mental Rehearsal is well done.  I wonder, though, if EFT might make Mental Rehearsal.  Since EFT helps to remove our blocks,  it might deal with the addictive state of the body’s cells and allow the mental rehearsal to proceed unhindered by the cell’s plea to return to its old familiar state.  Perhaps EFT, by reducing some of the blocks to change, could make Mental Rehearsal much more possible for some people.

This book is a big one, but if your’e interested in how the brain works neuroligically, and what you can do to optimize your life performance, then EVOLVE YOUR BRAIN should be on your list.  I”m thankful I read it!