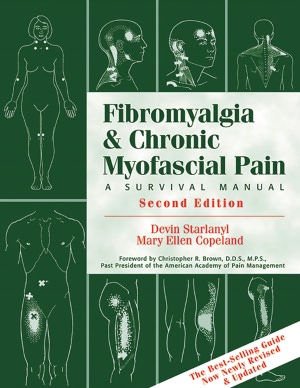 Fibromyalgia and Chronic Myofascial Pain  has been called the “Bible” of fibromyalgia.  Although it’s a decade old now,  it’s a great book to read if you want to understand human biology and its relationship to fibromyalgia pain.

I found this book very, very worthwhile, but as a person who works with EFT,  I see one major limitations in this book

I would have loved to see a discussion of Pert’s work in this book, and to see the author’s perpective on how this research relates to fibromyalgia.  Additionally I would have liked to have seen a discussion of quantum healing, but many of the books covering quantum healing were published after Fibromyalgia and Chronic Myofascial Pain.   That said, I still found this a hugely useful read for helping me to understand the symptoms and the anatomy of fibromyalgia.

I never had a high school or college anatomy class, but with the work I’m doing now I have become fascinated by our anatomy.  For instance, if you’re unfamiliar with the lymphatic system and how it circulates our immune cells and removes cellular waste,  Starlamyl and Copeland can give you a working feel for this system of the body in just a few pages. Same for the fascia of the body – until I became interested in fibromyalgia I didn’t give fascia a second thought – turns out fascia may be the critical component in causing fibromyalgia pain.

One very interesting note about the fascia is that it can go from its normal gel like consistency to a hardened consistency.  This could be a reason for pain – but what really fascinates me about this observation is to remember what Dawson church wrote about fascia in The Genie in Your Genes.  Church wrote about how the fascia is organized in a crystalline structure, which implies that it can work as a semiconductor.  Church notes the research which describes our fascia both as being an antenna receiver for information from outside the body, and also for being an  body-wide systemic instant communication system for the body. In Church’s example – chemical signaling would be far too slow to enable a batter to hit a professional fast ball pitch.  Fascia, as an instant body-wide signaling system, could provide the appropriate signal to allow major league baseball to exist as a game.

Another fascinating piece about fascia.  In Figuring Out Fibromyalgia, Ginevra Liption makes the case that fascia damage is responsible for fibromyalgia pain – and she notes that when fascia is damaged, the cells grow back in an unstructured chaotic arrangement, only slowly over time resuming their ordered crystalline structure.  Perhaps, if the fascia is unstructured and chaotic from damage, it cannot properly send or receive body signals, and perhaps this causes pain.

Fibromyalgia is not the same as Chronic Myofascial Pain:

The distinction between fibromyalgia and chronic myofascial pain is the strongest part of this book for me.  On a medical level, it brings up how misdiagnosed fibromyalgia often is.  Doctors are often not aware of the distinctions in these forms of chronic pain.  From a pain perspective, it turns out that treatments are specific, and treating one syndrome as if it were the opposite can increase instead of decrease pain.  The discussion of trigger points is equally valuable.  And it turns out that one syndrome can coexist with the other – in this case effects can be compounded, and treatments can be contradictory, thus making solutions even harder to achieve.

Once you get the anatomy and the biology, the remainder of Fibromyalgia and Chronic Myofascial Pain truly is a Survival Guide based on the author’s experiences.  Issue of Gender, sleep, age, environment, and more are covered in depth.  Medical and alternative treatments are discussed in detail. How to relate your doctor is covered, and how to be your own insistent advocate in a profession that doesn’t have all the answers or even all the awareness of fibromyalgia and what it is.

At the time of writing this book report, I have now introduced three fibromyalgia sufferers to EFT who have become completely pain free in two to eight sessions.  I am currently working with more people who have fibromyalgia and or chronic pain, and I have confidence that as I introduce other people to EFT for their fibromyalgia pain, many of them will also become pain free.  Fibromyalgia and Chronic Myofascial Pain does not consider this possibility.

The results that these three people achieved is outside of the perspective from which Starlanyl and Copeland write about fibromyalgia.  I think the issue of perspective and assumptions is critical to address.  From inside of a perspective we believe that we are dealing with “reality as it really exists.”  From outside of a particular perspective we realize that viewpoint influences outcome.

When I first saw people becoming fibromyalgia pain free, my emotion was intense gladness for the person, and also a high degree of anger at the medical establishment, which for all its efforts, is not curing fibromyalgia – just treating symptoms.

Viewpoint – viewpoint.  My anger was a viewpoint.  With the modified EFT that I do with clients, the process is to simply pay attention to emotions, memories, and physical sensations.  I started doing that process on myself, about my anger and my viewpoint toward the medical establishment.  It took some time before I could become aware and become an observer of my own viewpoint, and to step out of my way of seeing reality.  No longer am I angry.   No longer do I feel that I’m in battle mode with a medical establishment that doesn’t recognize energetic healing.  There was a time when I did not know about energetic healing.  Now I do know about energetic healing.  I’m evolving.  We are all evolving.  I have come to realize that the more we are able to simply be aware and pay attention, the more freedom will be present to us for the way our lives show up in reality.  For people with fibromyalgia – I realize this as GREAT NEWS!

Read this book, Fibromyalgia and Chronic Myofascial Pain – it’s a great study on the symptoms and anatomy of fibromyalgia and chronic myofascial pain.  Thank you to Starland and Copeland for a gigantic contribution to people’s understanding.