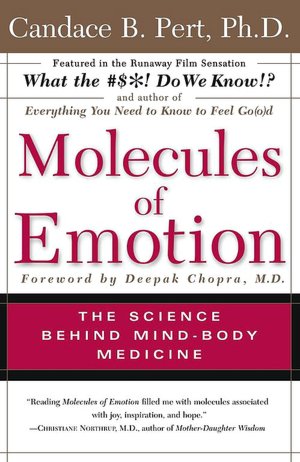 Peptides are short chains of amino acids.  (Proteins are longer, 100 or more amino acids gets called a protein.) Eighty neuropeptides had been identified by the time of this book’s 1997 publication.  Pert estimates that 300 or so will be discovered.

Further significant fact.  It used to be assumed that there was a definite barrier between the mind and the body, and that the brain did the mind aspect of our existence.  No longer.  It turns out that these peptides function not only across synapses in the brain cells, but also on each cell of the body, and also on each immune cell of the body.  The immune system had been previously thought to be completely isolated from communication with the rest of the body cells.

Further significant fact.  Not only do body cells and immune cells have receptors on their surfaces, they both also PRODUCE peptides, that is, they also create the biology of emotions within the cell.  A tense gut, therefore may be not only a response to a peptide produced from a gland, but may also be a product of peptides being produced right in the gut – that is, the gut is doing emotional thinking, not just reaction.  WOW.

Side Fact. – Candace Pert also did the original study showing that acupuncture works by stimulating the body to release endorphins.  Now, for me, that’s huge.  Tapping is producing the chemistry of the emotions of feeling good.

Implications-  Pert has proven, in scientific terms, that we are not mind and body in distinction, but we are bodymind together.

“ Emotions are cellular signals that are involved in the process of translating information into physical reality, literally transforming mind into matter.  Emotions are at the nexus between matter and mind, going back and forth between the two and influencing both.”  (page 189)

Pert has also shown that emotions, trauma, anger, fear, can get stuck in the cells of the body, at the level of cellular memory.

“Depressed people are stuck in a disruptive feedback loop that resists any kind of drug therapy that aims at suppression of the steroids (such as CRF, cortical releasing factor).  The reason we can get stuck like this is because these feelings get retained in the memory – not just in the brain, but all the way down to the cellular level.  This is how it works:  As CRF levels increase in highly stressed infants and children,  the receptors for CRF become desensitized, shrinking in size and decreasing in number.  These changes happen when receptors are flooded with a drug,whether it’s a drug your body produces or a drug you buy at a pharmacy.  The memory of the trauma is stored by these and other changes at the level of the neuropeptide receptor,  some occurring deep in the interior of the cell at the very roots of the receptor.  This is taking place bodywide.  Although such changes can be reversed, and need not be permanent, this takes time.”  (page 270)

The second half of the book,  Pert explores alternative therapies that work at this bodymind level to release trauma and improve health.  She is cited on the EFTUniverse website, but at the time Molecules of Emotions was published (1997), EFT had just been introduced (1994) so she was apparently unaware of EFT back then.

“My research has shown me that when emotions are expressed – which is to say that the biochemicals that are the substrate of an emotions are flowing freely – all systems are united and made whole.  When emotions are suppressed, denied, not allowed to be whatever they may be,  our network pathways get blocked, stopping the flow of the vital feel-good unifying chemicals that run both our biology and our behavior.  This, I believe is the state of unhealed feeling I believe we want so desperately to escape from.  (page 273)

Candace Pert offers all of us a beautiful biochemical explanation of how EFT works.  In the future I’ll be doing more explicit reading for quantum explanations of the mechanics of EFT’s function.  Pert does address quantum theory in a couple important ways.  First, she describes the huge receptor proteins as more like waving energy than as fixed chemistry,  vibrating, humming, creating a symphony together with other receptors and peptides.  Second,  she uses quantum theory to explain the newly understood importance of the observer.  Take a moment to read her words about the observer, keeping in mind the experience of how EFT allows the observer to actually shift the perception of reality as they tap.

“Including the observer in the equation admits a new level of intelligence to the system.  In the old metaphor, we ignored the observer in an attempt to avoid any taint of subjective interference in determining reality.  In the new metaphor, the observer plays an important role in defining the reality, because it is the observer’s participation that makes the difference.”

An additional fascination is Pert’s personal journey through the halls of scientific research. She shot to glory as a 26 year old graduate student with the discovery of the opiate receptor (the place where natural and artificial opiates (heroin) bind to a cell.  Her discovery set off a huge research race to discover peptides and the receptors where they bind to cells.  It was huge breakthrough for neurobiology and made her a start in the field, even as a graduate student.  As a woman, though, she chronicles, the dark side of scientific research, the “old boy” club that not only discriminates against women,  but plays the research for personal prestige rather than public service.  She vividly tells of the race for discovery and first publication, and also of splitting up research into as many publishable papers as possible, rather than focusing on coherent presentation of experimental results.  In her work on the AIDS virus she and her research partner discovered Peptide T, a far superior treatment to AZT, but after ten years they were still trying to get Peptide T into the system. AZT won because it was supported by laboratories that had a tradition of creating drug therapies.  Peptide T lost because it didn’t have an inside track.

Pert’s Molecules of Emotion ties so much together for me.  I will be rereading this book numerous times,  digesting the implications of her work for a long time to come.  I now have an explanation for how EFT works!