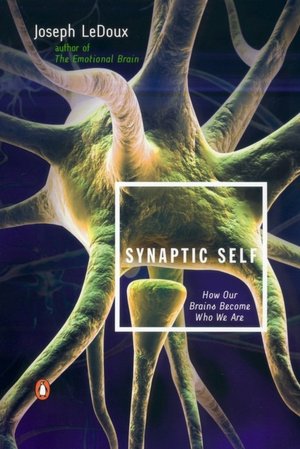 Synaptic Self: How our Brains Become Who We Are
Joseph LeDoux
Penguin Books, 2002

Joseph LeDoux published Synaptic Self six years after his first book, The Emotional Brain.    That book provided my first real science reading for grabbing onto why the Emotional Freedom Technique (EFT) might be functioning, and how EFT might be a solution for fibromyalgia symptoms.

One of my biggest learnings from The Emotional Brain concerned how extremely high or long lasting stress can cause the brain’s fear center, the amygdala, to send out so many stress signals that it ultimately overwhelms and damages the hippocampus.  And one of the responsibilities of this hippocampus is to moderate the amygdale, to slow it back down and return it to normal after it deals with its fear signal.  Once the hippocampus is damaged it is less able to calm the amygdale down and the body can end up stuck in the “on” position all the time, always dealing with fear.  The result is high stress hormone levels in the body on a constant basis.  This would be in line with the constant stress of fibromyalgia that then results in physical symptoms.  This amygdala-hippocampus relationship also suggests that tapping may work by helping the amygdala to deal with traumatic memories and take the edge off them so they no longer create the stress response in the body.

In Synaptic Self, LeDoux presents brain chemistry and brain biology at the level of the synapse – the connection point between brain cells.  LeDoux theorizes that our whole self finds definition because of the actions of our brain’s synapses.  I will restrict myself just to the couple of observations that I found most directly relevant to EFT and fibromyalgia.  I choose this limit first because EFT and fibromyalgia are my specific interest.  Secondly,  LeDoux’s work felt next to overwhelming for someone like me without a brain biology background.  Still, the nuggets made this challenging read worth every bit of the struggle.  And if LeDoux is right,  then brain chemistry somehow changes for a person between the time when they were free from fibromyalgia and the time when they grow to suffer from fibromyalgia symptoms.  Likewise,  if EFT provides relief,  brain chemistry must change again, at the level of synapses.

It’s just one paragraph in Synaptic Self, but it may be the key to how tapping works:

Studies of fear conditioning have also revived interest in a strange but possibly very significant phenomenon in memory research – reconsolidation.  The recent discovery, made by Karim Nader and Glenn Schafe in my lab, is that protein synthesis in the amygdala seems necessary for a recently activated memory to be kept as a memory.  That is, if you take a memory out of storage you have to make new proteins (you have to restore, or reconsolidate it) in order for the memory to remain a memory.  One way of thinking about this is that the brain that does the remembering is not the brain that formed the initial memory.  In order for the old memory to make sense in the current brain, the memory has to be updated…The practical effect of this is that it might be possible some day to have trauma victims recall their trauma in the presence of some drug or other brain alteration that reduces the stranglehold of the memory on the person’s psyche. Page 161

This paragraph is the closest neuroscience explanation I’ve found for how EFT might do its work.  First, some memory or emotion or event has happened in a person’s life, and now produces a negative impact on their emotional or physical state. Normally when that memory arises, it retriggers the amygdala’s fear reaction and creates stress again.  With tapping, the memory arises in a different setting ( a setting of love, where the words have already been spoken, “Even though I have this fear,  I DEEPLY AND COMPLETELY LOVE AND ACCEPT MYSELF).  The combination of vocalization and of tapping on acupressure points may provide a different enough setting for proteins to form in new ways and for the memory to reconsolidate in a context of love rather than the original fear mode.   The practical experience of tapping, whether or not this really defines the physical mechanism, surely does “reduce the stranglehold of the memory on the person’s psyche.”

Recently, while working with a fibromyalgia sufferer,  this person wanted to tap on her weight issues.  Thinking about her weight caused anxiety for this person, she felt out of control in the presence of food, she could not restrain herself.  Every time she saw food this feeling of being out of control reinforced itself.  As we began tapping a memory surfaced for this person, of a dangerous month-long illness she had suffered at the age of five.  Bedridden, sick and bored, she often felt hungry.  Her mother worried about her gaining weight while she was stuck in bed so she only received food at specific hours of the day.  She remembered not being in control of her food during that month.  What a paradox!  When she was five, the inability to have food caused her to feel out of control.  Being able to eat was the ability to have control back in her life.  And yet now, having control of her ability to eat food had turned into the feeling of being out of control about being able to turn down food.  With these memories surfaced we tapped on this paradox and this person very quickly felt a new freedom around food,  she no longer felt a need to eat food to prove that she was in control.  Her anxiety disappeared around the issue of her weight and she felt free to begin to lose her excess pounds.

This experience of anxiety disappearing happens frequently for people who work with EFT.  According to LeDoux’s paragraph about reconsolidation, the emotions about weight arose in a different context than they ever had before.  Acupressure points were being accessed.  Memories arose.  A new awareness came to mind.  A new understanding made sense.  Since the context changed new proteins had to be created so  memory could be reconsolidated.  The memory of the five year old illness then stored in a new way.  The current emotional feeling about food stored in a new way. For this person, the new memory stored without any anxiety attached to it.  The memory contained new understanding and hopefulness.

If LeDoux’s reconsolidation writing is correct, perhaps EFT creates results by this process, raising memories in a new context, and helping them to store in a more positive, peaceful, hopeful, loving environment.

If you read the rest of Synaptic Self, that quote above about reconsolidation will start to make sense in the details as well as the overall impact of recombination.  LeDoux’s details expand on the working of synapses – the connections between brain cells.  Understanding synapses lets us understand how the brain creates and maintains memories, how emotions process, how motivation gets acted upon, and every other aspect of who we are.  Even though the functions represent such drastic variety, the same synaptic chemistry underlies it all.  As LeDoux writes already on page 2 of Synaptic Self “My notion of self is pretty simple; it’s that your ‘self,’ the essence of who you are, reflects patterns of interconnectivity between neurons in your brain.”

Much of Synaptic Self works to explain what researchers know about synapses and synaptic transmission.  With these building blocks, LeDoux then looks at the three aspects of what he calls, “the Mental Trilogy” thinking, emotion, and motivation.   Following the Mental Trilogy, Le Doux covers a variety of mental illnesses from the perspective of synapses.  Although I’ve confessed to what a challenge I found this reading, the simplicity of looking at things from a synaptic level provides an amazing powerful framework.  GABA, glutamate,  Hebbian plasiticity, LTP all the things that happen at synapses;  when synapses change, so does the state of our being – schizophrenia, depression, anxiety, normalcy, mood, memory, emotion, motivation.

Finally, by the end of Synaptic Sickness LeDoux “bites the bullet” to give his theory on how he thinks synapses, “make us who we are.”  He provides seven principles, all of them seem imminently reasonable after you wade through the book.  If you even think you might be interested, grab Synaptic Self and give it a go.  If you get through this and The Emotional Brain you’ll never think about life the same way again.