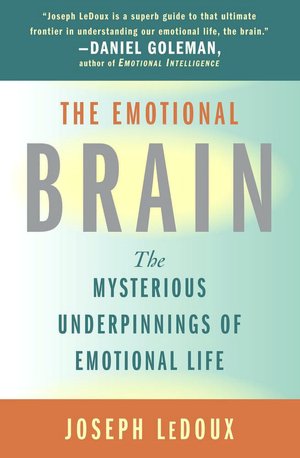 The Emotional Brain - by Joseph LeDoux

I read The Emotional Brain in search of better understandings for fibromyalgia, and why EFT (the Emotional Freedom Technique) can be effective in relieving pain.  The Emotional Brain was an absolutely captivating read for me.  I came away with dozens of pages of notes, and for the week that I studied my way through this book, I was stealing every available waking moment to engage and appreciate the range and depth of what Joseph LeDoux has made available to the community of the untrained curious.

I discovered three main relevancies to fibromyalgia and EFT.

Fibromyalgia and Emotions:
Before I get into reviewing The Emotional Brain, let me state the three reasons why fibromyalgia has made me so curious about brain function.

These three characteristics of people with fibromyalgia raise the questions of how emotions are related to physical pain in people who have fibromyalgia.  The Emotional Freedom Technique works on the assumption that using acupressure to address emotions can provide relief of emotional anxieties and physical pain symptoms.  I read The Emotional Brain in the hopes of better understanding fibromyalgia and why EFT works.

The Emotional Brain would have been worth reading just for the sake of LeDoux’s presentation of the history of philosophy, psychology, and brain research.  Behavioral psychologists, cognitive researchers, and all the rest, The Emotional Brain a captivating tale.  In this report I want to focus just on how brain research can be useful to understanding fibromyalgia and EFT.

Brain Item One:  The reaction of fear is faster than our decision about safety. (Chapter 6, pg. 162-165)
When a fear signal gets picked up by a person, perhaps through their sight or their hearing, that signal splits in two directions.  Let’s say it’s a visual signal, a long skinny something on the ground.

Unfortunately, long before this detailed signal gets to the amygdala, the other emergency signal already arrived and set the danger defenses in action (racing heart, raised hairs, higher blood pressure, tense muscles, etc).  That fast signal that went straight to the amygdala didn’t care what the long skinny thing really was. “It MIGHT be a snake”, therefore “take immediate defensive action.  NOW.”  In survival terms, better safe than sorry, better alive than possibly dead.

Fear is a reaction that occurs faster than we can rationally decide whether fear is appropriate.  By the time we decide that we’re safe, the body is already reacting.  The system works well for defending against lions and tigers and such.   Unfortunately this system creates the same bodily reaction for sticks as for snakes, ultimately adding lots of unneeded stress to a person’s life.

Beyond the direct danger signals which come from actual dangerous objects, we can also become conditioned to have a fear response when we notice something else that was near the truly dangerous thing. For instance the sound of a horn can become the conditioned response after a car accident.  As LeDoux writes,  “conditioned fear responses exhibit little diminution with the passage of time.  In fact, they often increase in their potency as time goes on – a phenomenon called the incubation of fear.”  (Page 203)

What does this mean for a person with fibromyalgia?
First, remember that people with fibromyalgia typically fit the description of being more “sensitive” than average.  I think it’s probable that this sensitivity includes being reactive to more fear signals than a non-sensitive person.  I assume that sensitive people get their amygdala triggered more often than less sensitive people.  And every time the amygdala gets triggered it activates the body to respond to danger. More on this in a bit.

Second, people with fibromyalgia report more often than others that they experienced abuse or trauma in their early years.  This trauma or abuse would be a strong trigger for the amygdala back at the time of the abuse.  It would also likely create some conditioned responses that could easily continue as a source of fear reactions long after the abuse or trauma was over. I don’t know if sensitivity and early trauma are related, but it wouldn’t surprise me if a correlation exists.

Brain Item Two:  How the brain resolves a fear reaction (Chapter 8 – Page 240)
A danger signal is potentially a matter of life and death, so it makes sense that the brain reaction is complicated and thorough.  One part of that response seems particularly relevant for fibromyalgia.

Along with all the other danger responses that the amygdala puts in motion when it gets that first fast danger signal, is a command to produce a stress hormone that goes out into other parts of the brain and gets them involved in the emergency.

In a regular fear reaction, the amygdala oscillates between increasing and decreasing its fear reaction and ultimately comes back to a resting state. Relief.

Brain Item Three:  When the fear reaction gets stuck in the ON position.  (Chapter 8, 242)
We’ve all heard about how stress can impact our health, increase our blood pressure, make us lose sleep, etc., etc.  It turns out that too much of this stress hormone also harms the hippocampus.  The hippocampus, as described above, takes the stress hormone and uses it to send a “calm down” signal to the amygdala.

In a normal situation, once the fear signal is resolved, the amygdala cycles back to a resting state because of the hippocampus giving out the “calm down” signal.

What does this mean for a person with fibromyalgia?

One of the common experiences of people with fibromyalgia is that their pain was triggered by a severe emotional or physical trauma in their life.  Before that event they did not have chronic pain. After that event, the pain began and never went away.

Take a person who has suffered abuse or trauma in their early years.  Their danger signals spent a lot of time at high alert in those early years.  The amygdala kept taking those stress hormones and producing even more fear responses. The hippocampus, sending out its calming signals was working overtime.

Take a person who has a sensitive nature.  That person’s sensitivity would magnify incoming danger signals, causing the amygdala to create more stress hormones, making the hippocampus work even harder to send out enough calming signals.

Take a person who has both a sensitive nature and has suffured early abuse or trauma. That person has an overworked hippocampus. Add a full blown physical or emotional emergency sometime later in life,and that might just be enough to overwhelm the hippocampus.  Such a stress might wreck the ability of the hippocampus to calm the amygdala.  The amygdala gets stuck in the ON position.

LeDoux notes further, “During stress, weak conditioned fear responses may become stronger…for example, a snake phobic might be in remission for years but upon the death of his spouse the phobia returns…The stress is unrelated to the disorder that develops and is instead a condition that lowers the threshold for an anxiety disorder, making the individual vulnerable to anxiety, but not dictating the nature of the disorder that will emerge.”  (LeDoux, 247)

Whether or not this is what actually happens for a person with fibromyalgia, I cannot say, but as far as I can tell, this explanation is consistent with the research of Joseph LeDoux.  Joseph LeDoux’s research into the emotion of fear provides a possible explanation of the cause of fibromyalgia pain.

What about EFT and Fibromyalgia?

The Emotional Brain does not explain how EFT acupressure tapping and focusing on the anxiety-producing-issue might provide relief from both anxiety and physical pain. Still, I find it easy to speculate on aspects of LeDoux’s work that might help us understand  EFT.

As noted above, LeDoux has mapped the relative speed of the fear signals that go to the amygdala.  The direct route to the amygdala, the one that activates the body’s fear response is twice as fast as the signal that gets processed first by the cortex.   In another section of the book, he writes about the amygdala not only receiving input, but also having connections that go back to the cortex.  “Interestingly, it is well known that the connection from the cortical areas to the amydgdala are far weaker than the connections from the amygdala to the cortex.  This may explain why it is so easy for emotional information to invade our conscious thoughts, but so hard for us to gain conscious control over our emotions.  Psychoanalysis may be such a prolonged process because of the asymmetry in connections between the cortex and the amygdala.”  (LeDoux, 265)

If psychoanalysis is using this weak pathway to affect emotions, could EFT be accessing some different pathways that can more quickly and powerfully impact our emotions?  Or is this even the right paradigm to be looking at;  the framework of brain chemistry?  EFT is part of what is often called Energy Psychology.  This “subtle energy” is not described in the same scientific manner as LeDoux does with brain functions.  What is the relationship to EFT and this scientific view of brain function?   LeDoux provides a fantastic basis of information from which to explore the relationship between EFT and brain function.  Sometime when you have a few weeks to stretch your brain, try reading The Emotional Brain. I recommend having a thick notebook at your side for notes.