When The Body Says NO

When The Body Says NO: Exploring the Stress-Disease Connection, by Gabor Maté, M.D. Wiley Press, 2003 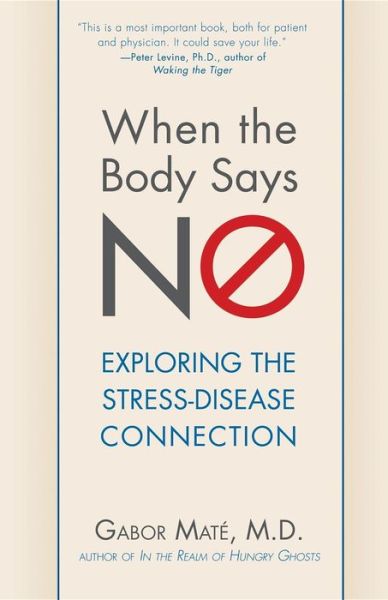 When The Body Says No

The ICE Method and EFT tapping have exposed me to a lot about the link between our emotions and our physical health. Dr. Gabor Maté, a family physician and palliative care physician, takes that exposure to a much broader level.  In life history interviews with his patients, Dr. Maté has documented the linkages between stress and disease.  He has done so for a wider variety of diseases than I would have imagined.  Some of the diseases include a variety of cancers, Lou Gehrig’s disease, scleroderma, rheumatoid arthritis, Crohn’s Disease, ulcerative colitis, intestinal bowel syndrome, fibromyalgia, and more.

This is a book that sits high on my recommended list of readings – both for Dr. Maté’s own finding as well as the extensive research studies that he quotes.  Part of what’s so great about this book is that many medical studies already do exist, documenting the connection between life experience, stress, and disease.  There are even many specific studies for particular diseases.  For one who spends my time helping people come out of their stress states and into their calm state, this book is a real confirmation of the utlity of The ICE Method.   Still, ten years after Maté’s publication, our medical world still has not made stress and life experience a central part of our medical care system.

Maté acknowledges that the connection between stress and health can be sensitive, that we too often turn to blaming ourselves or ohers for the life situations that led to our disease.  To this response Mate makes two suggestions.

Mate’s book was published in 2003, the year prior to the discovery of “memory reconsolidation.”  At the time of Mate’s writing, psychologists believed that early memories were imprinted permanently into the brain, and the best that could be done in a person’s life was to find more effective ways to deal with early trauma.   Memory reconsolidation has still not become known on a widespread basis,  but for those who are aware,  the traumas of early childhood, and any other non-peaceful emotions from anytime in a person’s life can be reconsolidated so that they no longer cause reactions to a persons stress system and physical health.

At the end of WHEN THE BODY SAYS NO, Maté lists seven attributes that are necessary for health: acceptance, awareness, anger, autonomy, attachment, assertion, and affirmation.  The ICE Method,  I believe, can help a person clear old emotional peptides and replace them with calm.  By using memory reconsolidation, early stresses can be deactivated and the brain’s hippocampus can repair so that stress can be dealth with more normally. Then the work of developing these attributes can proceed much more effectively.

Maté has provided an enormously useful book that has me more excited than ever about the possibilities of employing ICE and other memory reconsolidation techniques to provide both emotional and physical health.