“Ultimately all the symptoms of fibromyalgia stem from abnormal
activation of the fight-or-flight nervous system.” 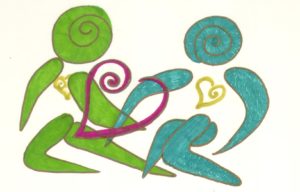 Priority One: “Let’s get that stress respose unstuck.”

There’s lots more information on this website for you to be able to understand what’s happening to your body when you’re stuck in fight-or-flight mode.

Unfortunately: Medical science does not acknowledge a solution for fibromyalgia.

“Medical science has not yet figured out how to turn off the switch of the stress response that gets stuck in the “on” position in fibromyalgia. When we do that we will have found a cure.

“Right now there are some very effective treatments that address the end results caused by the abnormal stress response.”

In other words, traditional medicine focuses on treating the symptoms of fibromyalgia, not the causes.  I work with people all the time, helping them to turn off their fight-or-flight response and helping them to feel amazingly better.  Medical science is somehow not yet open to the possibility of turning off the fight-or-flight response.  Perhaps it is because traditional Cartesian science is so committed to the complete separation between human emotions and hard scientific data.

The problem is that the fight-or-flight response gets stuck on because of a person’s life experiences.  If medicine doesn’t address life experiences, then there will be no reduction of the stress response.  And that’s the dilemma today. Even though there is plenty of published science describing the neurobiology of the relationship between emotions and cellular chemistry and health, this scientific data has not been incorporated into the medical treatment of fibromyalgia.

Luckily, I can show you how to turn off your fight-or-flight stress response.

The solution to your fibromyalgia pain is paradoxical, yet simple.  Most people in our culture believe that to accomplish anything of value is going to take effort. The more important the outcome, the more extraordinary the effort will have to be.

Extraordinary effort turns out to be the exact wrong approach to solving fibromyalgia.  For a person whose fight-or-flight response is already in a mode of hypervigilance, such effort increases stress, and ultimately aggravates the symptoms.  People who come to see me are usually exhausted from all their effort, and they are discouraged, because nothing they have ever done has successfully solved their fibromyalgia problem.

Instead of fighting the fibromyalgia problem, I use The ICE Method with people to simply become aware and pay attention to their emotions, experiences, and physical sensations.  As a person becomes aware, they can begin to back away from the intensity.  As the intensity of the emotions, experiences, and physical sensations subsides, your hypothalmus actually begins producing a different chemistry for your body.  Once you change away from the adrenaline and cortisol chemistry of the fight or flight response, the pain of fibromyalgia often begins to decrease.

The work I do is not magic,  it’s based on published scientific research, I call it The ICE Method, an acronym for IDENTIFY, CALM, and EXCHANGE.  I use a combination of insights and practices that have roots in The Emotional Freedom Technique (EFT, also known as tapping), Quantum Healing, and Brain Neurochemistry.  While these are almost certainly not the only possibilities for helping people solve their fibromyalgia pain, I find them to be gentle, speedy, and effective.

Discover how the brain produces chemicals based on how you’re feeling.  Learn how those chemicals create the instructions for how your body feels and functions.

Do it yourself or have me facilitate your process.

On this website you will find plenty of information so you can begin reducing your own fibromyalgia pain. Since you will be dealing with your own consciousness and subconscious you may find that its difficult to become aware of what’s going on in your subconscious.  That’s just the nature of our subconscious – its hidden from us.  This is when working with a trained facilitator can greatly increase the speed and effectiveness of your process.  If you are interested in hiring me as your facilitator, please click on the services page.

If you have fibromyalgia, I have the utmost respect for the chronic pain and other symptoms you are putting up with.  If you are like most people I work with you, are weary and exhausted, and it would be a huge effort to get up enough energy to try “one more thing.”

I want to let you know that people find this process very very relaxing.  Instead of fighting the fibromyalgia battle, we’re simply paying attention and being aware.  It is refreshing, and it is effective.  The process may bring up intense and difficult memories, but these can be engaged at a pace of your own choosing.  There is no battle to be fought with anything from your past – this work is not a battle.  Simply by paying attention, brain chemistry changes, and body physiology also changes in response.  There’s no fighting through a list of demons to get well.  It really is just paying attention and being aware, and letting the natural healing tendency of the body come back into play as the fight-or-flight response is turned down and then stopped.

I feel so thankful that you have found this website, whether through a friend’s recommendation or through a search.  My deepest wish is that you’ll find information here that will help you on the road to restored health.  If I can be of personal assistance, I look forward to meeting you via phone or skype.